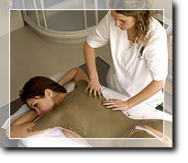 The thermal mud is a special mixture formed of a clayey solid component, a liquid component (thermal water of different composition) and an organic component that mainly forms during the maturation period. Before the thirties clay was considered an amorphous and colloidal substance, while the modern mineralogical methods allowed pointing out its most important components: the clayey minerals. The discovery of the said minerals surely helped to better understand the mud's "maturation process", which lasts 1 - 2 years. During this process there's an enrichment of vegetal and animal micro-organic substances and at the same time a deeper and deeper mixture occurs among the various fractions that form it. According to their special structure, thermal muds perform the curative action through special stimuli that are, in particular: caloric actions, mechanical stresses, physical-chemical and chemical actions. As far as the caloric component is concerned, no other substance like mud includes in itself physical and physical-chemical properties that allow it bringing much warmth and releasing it slowly on the muddy section without causing any heat inconveniences.