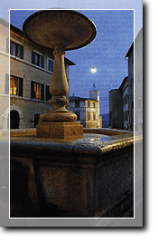 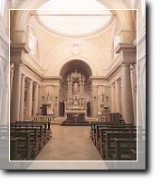 Chianciano Vecchia or Paese, as is called the ancient town of Chianciano. Its aspect is very different from the modern quarter that has grown all around the Terme. It is situated on a hill and shows part of its medieval town walls and its ancient urban plan. The gate of the town is at the end of Via Dante, where stands Porta Rivellini with its elegant Renaissance structure.

Soon after the arch stands the Church of the Immaculate Conception, that once had the title of St. Mary of the Star (1455) and the title of death (1580) because it was given to the Brotherhood of Death. Here in the past there was the church of Borgo alle Taverne (1317), a hospital and a tower. The tower had to be restored in 1576, but it ruined and a new Church dedicated to the Virgin Mary of the Star was built in the same place where in 1789 a fresco representing the Virgin Mary of the Peace was set up. According to some documents, the Virgin Mary of the Peace is one of the patron saints of the town and the fresco is attributed to Pietro Perugino or Pietro of Cortona; others, however, attribute it to Signorelli.

At the end of Via Casini stands out the elegant and simple Bell Tower. Its structure is medieval, but it was adjusted in subsequent periods when a marble covering was added. On its façade you can admire the Medicis' coat of arms which was added when the domination of Florence get the definitive control of the town.

From the Bell Tower you get to Piazza Matteotti, where face, on both sides, two palaces dwelled by the elders of Chianciano, the Town Hall and in the middle a beautiful hexagonal marble fountain (18th century) placed on a hexagonal flight of steps. In the middle the column which supports the flat table where water springs out. On the left of Piazza Matteotti, you enter Manenti Castle, also called as the Monastery for its silence. According to a document of 1072, in those times the Castle was under the domination of Counts Manenti, masters of Chiusi, Sarteano and Chianciano, who linked this fief to Siena in 1229. After their domination, between 1264 and 1276, Chianciano is known to flourish again even in its urban plan and to become a free city. However, Orvieto did always contend it with Siena, but it was Florence who finally get it, like the whole Tuscany, after a destructive resistance in 1557.

Going towards Piazza Matteotti you get to Via Solferino and then to Piazzolina dei Soldati, where there is the Deanship's Palace with the Museum of Sacred Art. Palazzo De Vegni was built between the XVIII and XIX century and now is owned by the town. Inside, interesting exibitions and cultural events are prepared. Leonardo Massimiliano De Vegni was one of the most important persons in the XVIII century. He was a writer and an artist; he designed the decoration of the Church of Madonna of Rose. In front of Via Solferino there is a square where stands the Collegiate Church or Church of St. John the Baptist. Of the ancient XIII-century building remains only the wonderful Romanesque portal adorned by concentric arches. The nave is characterized by a big arch resting on projecting columns and by a trabeated colonnade near the transept.

Going through Via della Croce you reach the Church of Company or Oratory of the Brotherhood of Holy Rood. Inside you can admire an interesting XV-century fresco representing "The betrayal of Judas" and "The capture of Jesus Christ" and other paintings representing "Saints". Moving away from the church, you can lean out of the parapet to admire the beautiful panorama of the valley below, called as Valle delle Volpaie, where stands the temple of Madonna of Rose. Continue till you reach Porta del Sole, made of brick. It has two side-towers with a sort of stair-formed top and a half-hexagonal arch in the middle.

Just at few metres from Porta del Sole, stands the temple dedicated to Madonna of Rose, the most beautiful church in Chianciano, designed by Baldassarre Lanci, the architect of the Duke of Urbino, in 1569. Inside, you can admire a wall painting representing Madonna of Rose, who was considered as the patron saint of Orvieto with at her sides St. John and St. Bartholomew, the patron saints of Chianciano. The pillar at the entrance represents a particular scene of rural life, witness to local farmers' financial support to the building of the church.

This extract is taken from the Guide to Chianciano Terme and its outskirts
by Mrs. S. Orienti and G. Vagaggini Poppi