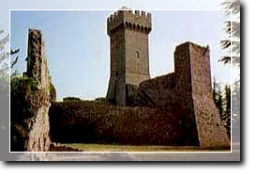 The town dominates the Val d'Orcia from a top an isolated rock, from which rise the ruins of an ancient castle.
It was an important location along the border of the Roman state.
The fortifications which Cosimo I ordered on account of the explosion of a powder magazine in 1735 have since been destroyed.
Radicofani remains famous for the deeds of the bandit Ghino di Tacco who lived here for many years.
Works in terracotta by Luca della Robbia are kept within the church of S. Pietro.
The church of S. Agata in the gothic-Sienese style.

The evocative Edificio della Posta from l6th century with its facade and double “loggia” is found on Via Francigena.
Many illustrious men have stayed here, among them Chateaubriand, Dickens and Montaigne, this last being particularyly passionate about the Italian cousin and appreciative of the use of olive oil in the preparation of certain dishes.
In his writing recalled the cordiality and hospitality of the Tuscans.